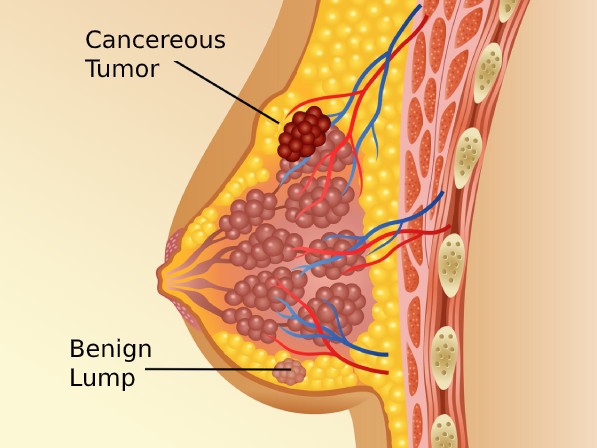 One of the characteristic features in the whole Animal Kingdom is the presence of mammary glands in mammals. Breasts are of utmost physiological significance in human beings.

Breast cancer is the cancer of breasts, which leads to unnatural division and growth of cells in the breasts. Breast cancer is said to be one of the most common cancers that women die of, every year. Breast cancer can occur in both men and women, but it is far more prominent in that of women.

Over the past few decades, breast cancer cases have significantly increased. It is one of the most common types of cancers. Breast cancer is the most common cancer to affect women, with a recent estimate of lifetime risk being one in eight. According to GLOBOCAN estimation in 2018, approximately 2.1 million new female breast cancer cases diagnosed worldwide. In India, Breast cancer ranks first among all other female cancers with an age-adjusted rate as high as 25.8 per 100,000 women and mortality 12.7 per 100,000 women.

Breast cancer can be considered to be a very complex issue, wherein multistage deregulation of signalling cascade leads to the cancerous stage. According to a study, over 90,000 new cancer cases are estimated to occur in 2013 and over 50,000 women estimated to die of it annually were Indian. This scenario has not much improved since then.

Reports suggest that "Breast cancer is a multifactorial and hence multitargeted disease." Said this, it makes breast cancer to be one of the most complex diseases of today and something which demands prompt action.

Breast cancer is such a disease which can be aimed to be properly treated, provided being diagnosed early or at the correct time. Despite technological advancements made, India has a very dwindling picture to present. On one hand, there are advancements made in the diagnostic level for the address of the disease, and on the other, rising rates of mortality due to breast cancer. This demands the need to know an important aspect,i.e.,- Cancer literacy among the people, especially women.

The technicalities and medical terminologies associated with breast cancer make it very difficult to understand for the laymen. There should be enough articles and journals, camps in rural areas to address the issue with simpler, but proper terms and technicalities. When the masses, get to know, that this disease is not life threatening and can be cured if diagnosed on time, the mortality rates would surely go downhill. For this, all that is needed is simpler narratives for them and affordable institutions to treat the same.

There are various types of breast cancers. Every patient has a different expression of the same disease. The most prevalent one, that has been reported in India is triple-negative breast cancer (TNBC). It generally occurs in young women. According to a scientific analysis survey, the proportion of TNBC ranges from 6.7% to 27.9% in different countries, with the highest reported percentage in India among all, followed by Indonesia, Algeria, and Pakistan. The survey also suggests the prime reasons for the highest proportion of the disease in India is due to lifestyle, deprivation status, obesity, family history, high mitotic indexes, and BRCA1 mutations.

Choose the proper place to get treated

Get treated at the best breast cancer treatment centres in Gurgaon, Delhi, NCR

Another reason, which makes breast cancer fatal is due to the lack of targeted therapies to treat the cancer cells. There is a dearth of the technical as well as medical know-how, for directing the suitable therapy for the various sub-types of breast cancer.

The sheer ignorance and lack of self-care could lead to fatality. In an era of prolific medical advancements made, not getting proper medical treatment for a curable disease like breast cancer, is indeed very disheartening. There are some of the best breast care treatments available at NCR, which can be easily resorted to and thus, could prove to be life –saviour!

Our centre Breast Health is highly dedicated in the field of breast treatment. It is marked as one of the dedicated patient care which helps the patients to deal with all their problems.